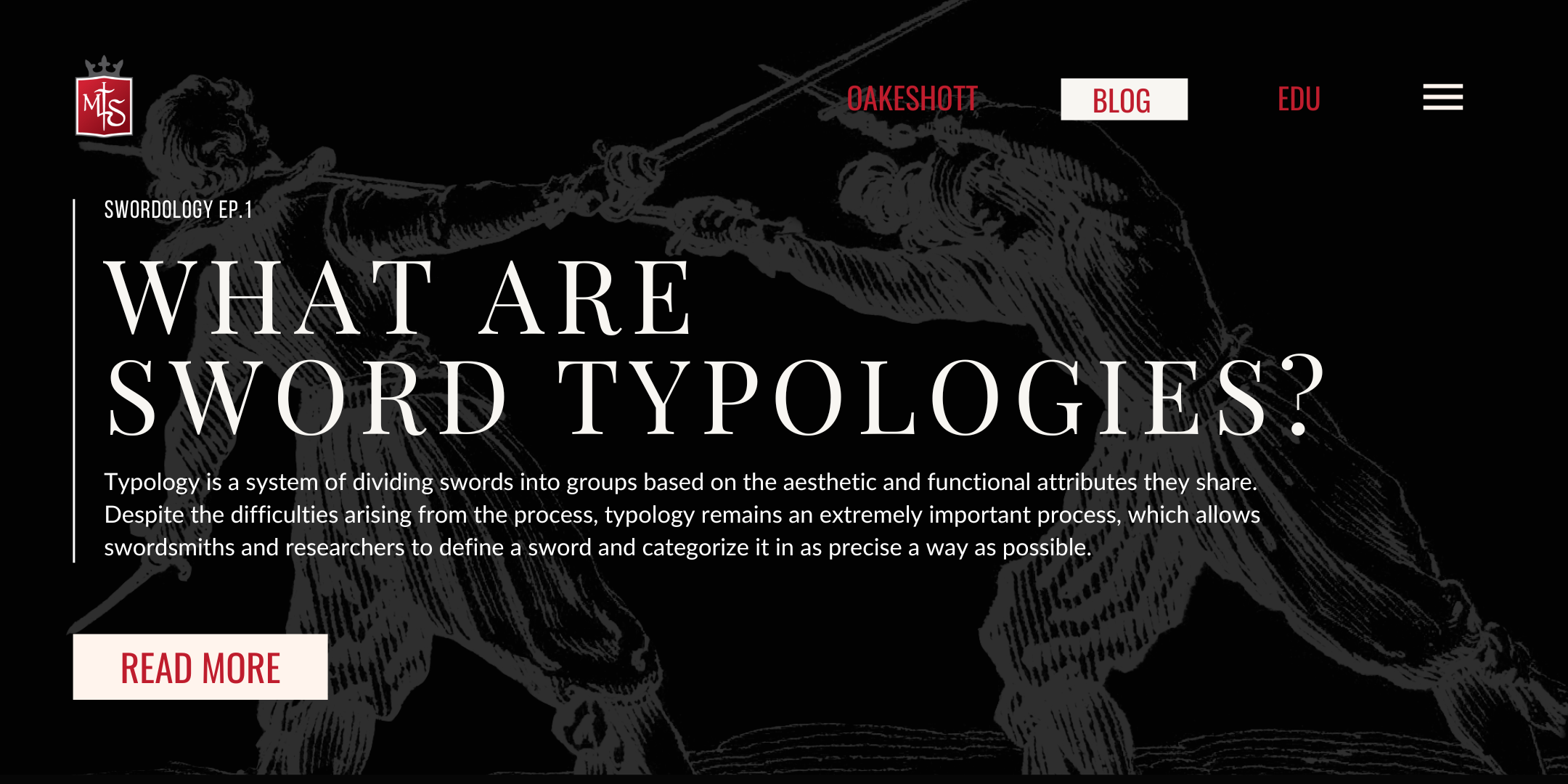 In a new series of blog posts, Florentine swordsmiths, Malleus Martialis, bring you:

An introduction to sword classifications, sword anatomy and museum highlights to help you understand the world of swords so much better.

If you’ve always been intrigued by swords and wanted to know more about them, we’ll be bringing you all the details you’ve been craving. We’ll help you find out all there is to know about swords, provide insights into how to interact with them, “how tos” and much more.

If you have heard names like Oakeshott or Peterson but always wondered what people mean when they talk about Type XVIII swords – don’t worry. Our first Swordology post will enlighten you about sword types and classifications so you’ll never feel unenlightened again.

What are sword typologies and why do they need to be used?

Typology is a system of dividing swords into groups based on the aesthetic and functional attributes they share. However, it’s important to state first that classifications are not universal, they’re created in a more organic way.

When looking at a sword to decide on its classification, we rely upon different definitions left by several scholars. Ewart Oakeshott, Elis Behmer and Alfred Geibig, to name merely a few, all used different systems to recognize groupings, types or styles through the centuries and these act as a reference point for a sword’s classification.

Despite the difficulties arising from the process, typology remains an extremely important process, which allows swordsmiths and researchers to define a sword and categorize it in as precise a way as possible.

The way of presenting a sword’s type, through the shared method, is to use the name of the scholar, followed by the type of the blade and/or hilt parts.

To show you what we mean, let’s use the classification:

Oakeshott Type XV with a style 8 curved guard and a J1 pommel.

With that definition in mind, we find it is our very own Belladama that is being described. 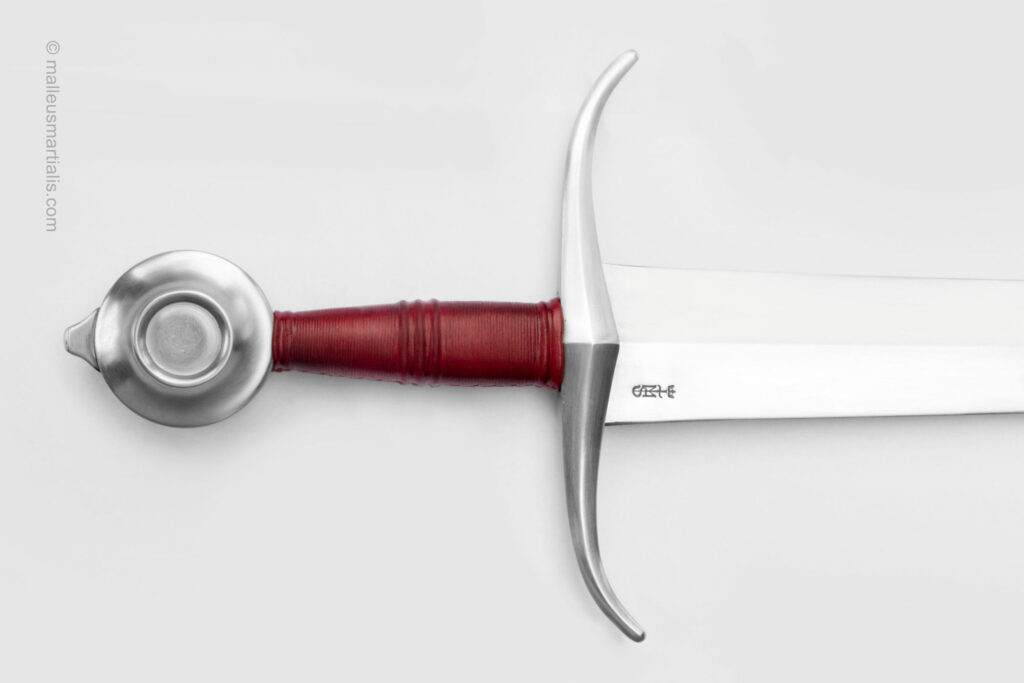 By using the sword typologies we have a way of categorising swords without the need for long explanations all the time. But it is important to note that typologies are artificial constructs that are often imperfect and are not to be taken as absolutes.

There are exceptions among artefacts that are hard to categorise as they don’t fit into standard typologies. As a result, this doesn’t make these artefacts “wrong”, but unique.

While we have several sources to refer to when discerning a sword’s typology, this process can be harder to determine with historic weapons.

It might seem easy to describe a sword based on its anatomy, but factors such as its adaption for warfare, trade and fashion can potentially obscure its original form. This makes the dating of a weapon’s manufacture, use and retirement problematic or even unreliable.

By using sword typologies, we can also recreate swords that are in certain parameters in a given time without reproducing an extant piece.

We can make educated guesses about what a specific configuration would have looked like and opt for certain properties and functionality depending on the intended use. We can do this whilst maintaining important parameters like ratio, point of balance, and weight close to extant examples.

What sword typologies are the most important to know?

Some of the most famous and widely used typologies for swords are listed here: 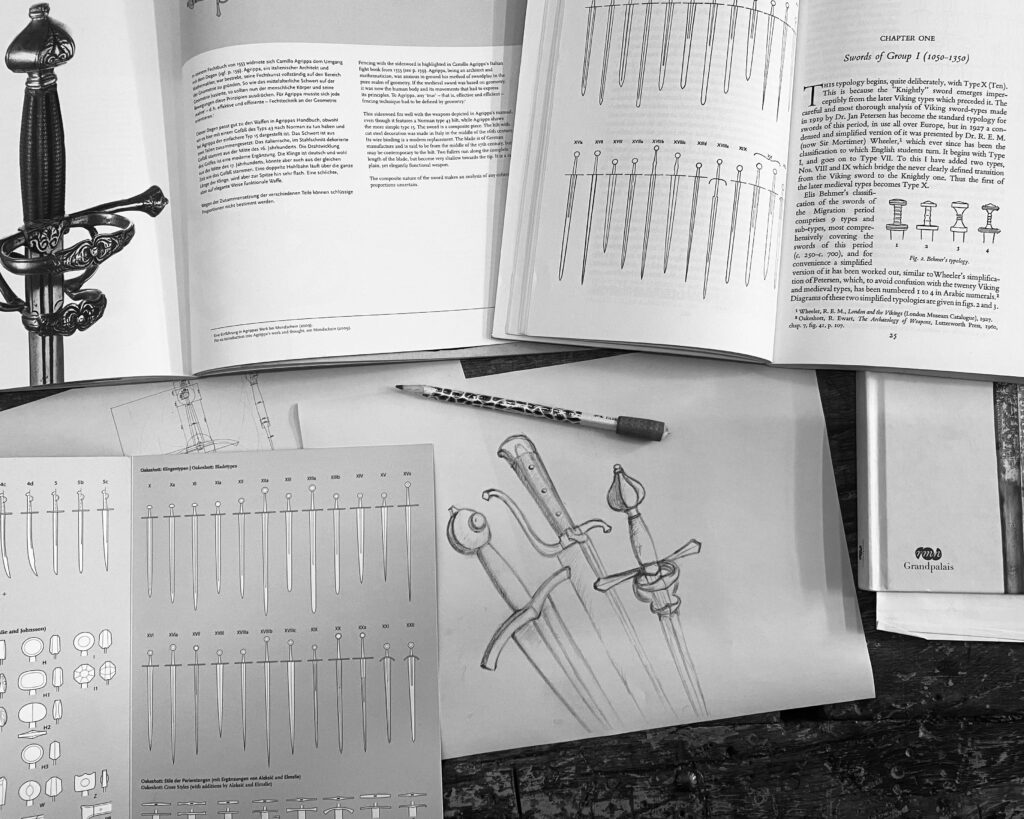 Why should we still look at originals when we have sword typologies?

Besides original swords being awesome, as stated before, typologies are no absolutes, they need to be updated or extended when new artefacts are found. Also, some typologies describe forms from a certain time period for which we have no physical proof and written records can only go so far in describing a physical item. It’s important to cross-reference typologies on paper with original swords to accurately define a new weapon’s category.

What should we look for when inspecting original swords?

Original swords hold a myriad of clues to the expert eye. On them, we find details which allow us to link original swords to new models. And when inspecting the originals we try to ask ourselves the following questions:

Besides being a weapon, we also look at swords as pieces of art, with their different and sometimes unique styles, and we try to incorporate them into our works. Also, we collect the data not provided in the typologies: weight and point of balance, for example, that is essential to our craft.

What classifications are we mostly using at Malleus Martialis?

Knowledge is power – if you’d like to deepen your knowledge of sword typography you can invest in some books.

To find out more detailed information, we recommend reading:

See you next time!