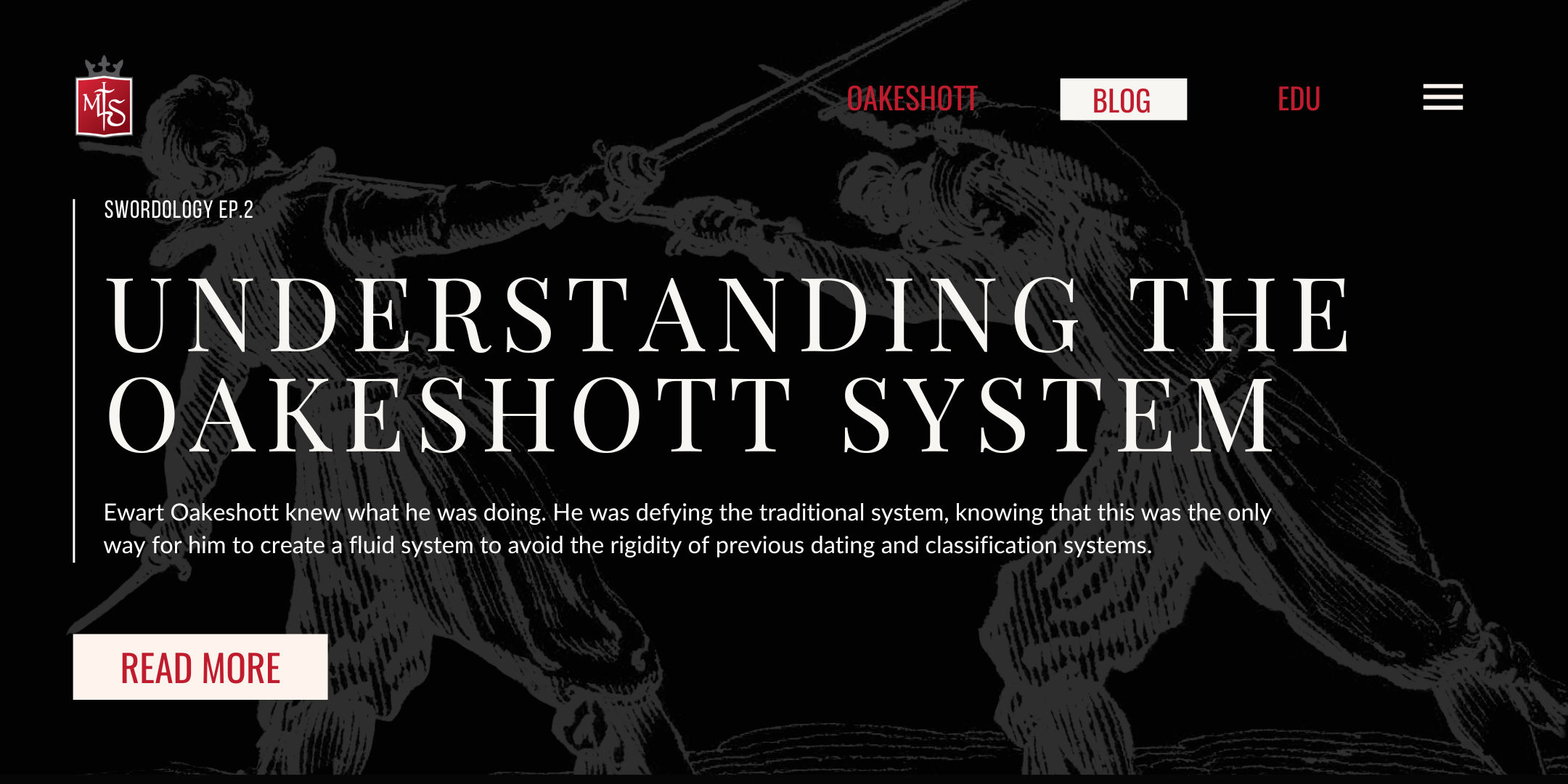 Florentine swordsmiths,  Malleus Martialis, bring you our second episode of

A new series of blog posts that brings you details about sword classifications, sword anatomy and museum highlights to initiate you into the world of swords in an accessible way.

We’re pledging to serve up some of those key sword secrets you’ve been craving. And we know you won’t be disappointed with our second episode. This time, we’re focusing on the super-famous Oakeshott Classification. Don’t know what that is? Read on and we’ll have you covered.

Have you ever wondered about all those numbers and letters describing medieval swords? If so, we’ll introduce you to the whole system in this post. Don’t worry, we’ll be gentle. Why start with Oakeshott? Not only is it an important classification in the sword world, but at Malleus Martialis, we’re huge fans of this sword typology!

Are you ready? Let’s meet the person behind the classification and dive into the details. 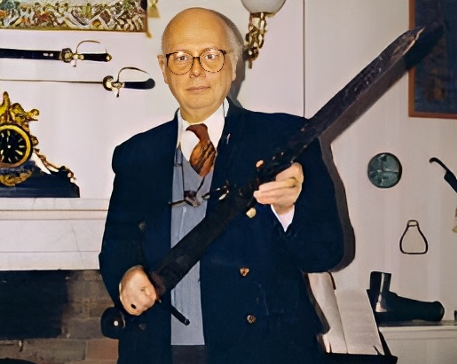 In our first Swordology episode, we gave a general introduction to sword typologies and classifications.

Within that post, you found out that Malleus Martialis mostly use the Oakeshott classification system for our medieval blades.

The man who gave his name to the classification was Ronald Ewart Oakeshott.

Born on May 25th, 1916, in Ruislip, London, Oakeshott got introduced to swords quite early in life. His uncle had a collection of antique swords that fired young Ewart’s imagination.

This collection had such an impact on him that it sparked his own interest. Soon he started to collect swords himself. As he could acquire antique swords quite cheaply in the early 1930s and 1940s, Oakeshott managed to expand his collection.

He was frustrated, however, by the lack of information about these swords. He was a man of spirit so he began to research them himself.

After studying at the Central School of Art in London he worked as an illustrator, which became very handy for illustrating his books about medieval weapons and supported him while he continued his sword research.

His lifelong dedication to history and research was interrupted by WWII (1940 to 1945) during which he served in the Royal Navy. His work as a commercial artist continued after the war until 1960 when he became a full-time researcher and writer.

He founded the Oakeshott Institute in 2000 which is still running and members are still recruited. He left his collection of more than 75 swords to the organisation after his death on 30th September, 2002, in order that they would be available for further study by future generations.

The Oakeshott System of Categorisation – Deconstructed

“So the following typologies are based purely and simply upon an aesthetic standard, form and proportion being the only criteria. This may seem to be a serious archaeological heresy; the only excuse I can offer for it is that it works.”

Ewart Oakeshott knew what he was doing. He was defying the traditional system, knowing that this was the only way for him to create a fluid system. And he would avoid the rigidity of previous dating and classification systems.

Oakeshott’s specialism was medieval swords but because the medieval period covers such a long time span, approximately 476 A.D. to 1453-92 A.D., it meant that swords of this period changed considerably, both in hilt and blade form. So Oakeshott started to focus on the sword as a whole. 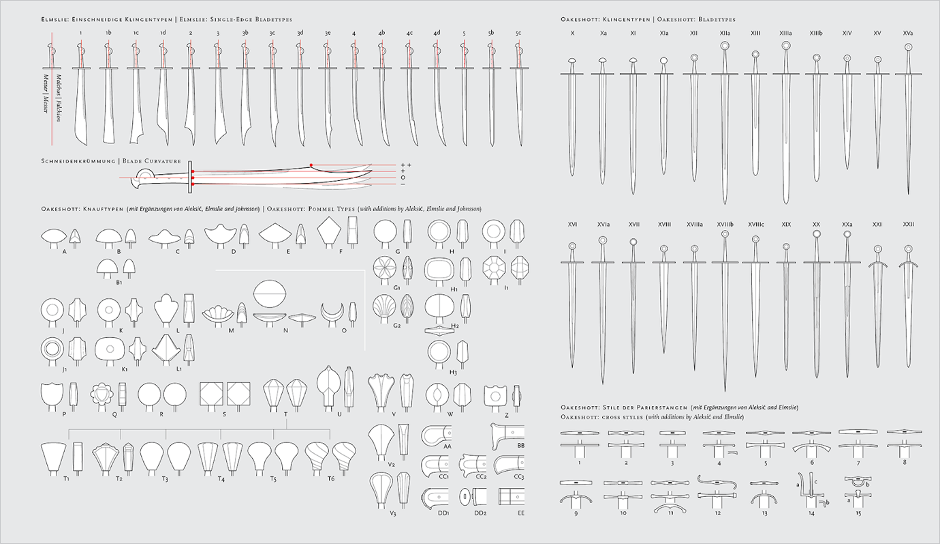 His “spiritual predecessors” mainly focused on hilt styles, so Oakeshott added two transitional types, VIII and IX, pointing out the links between the Viking and medieval sword aesthetics.

Adding to Petersen and Wheeler’s Viking types was merely the beginning. From there Oakeshott continued his classification system by establishing some archetypical medieval sword blade forms called types – starting at type X and continuing up to type XXII.

Occasionally you might find a letter after the Roman numerals: these are the subtypes and are additional branches of the single typology.

Oakeshott may have publicly stated that his main focus was aesthetics but he recognised that form was absolutely bonded to function. In recognition of this, he divided swords into two groups based on their intended functional purpose:

This sword group typically features wide, flat blades with lenticular cross-sections, optimized for cutting and swordsmiths developed them to be effective against mail armour.

This sword group have with acute points and reinforced cross-sections, diamond and hexagonal shaped, which has a stiffening effect on the blades for thrusting purposes. These were created by military designers to use against wearers of plate armour. 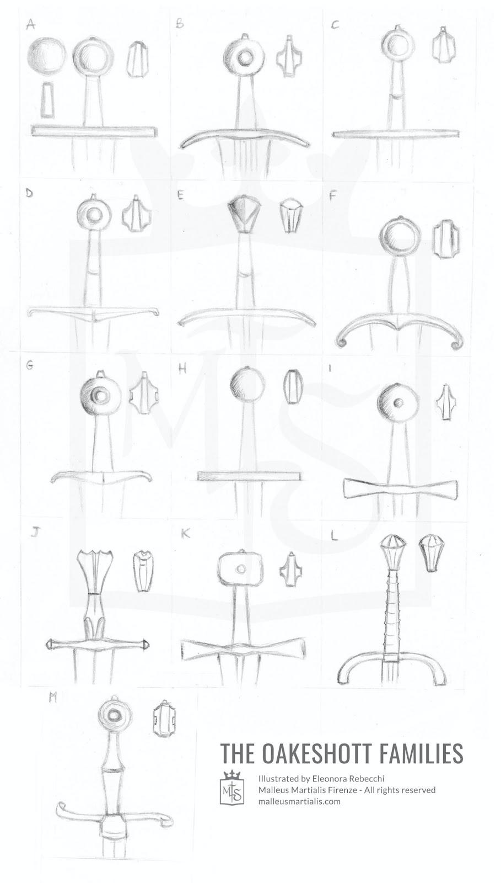 Malleus Martialis approach Oakeshott’s typology blade first. After that, we find cross styles and pommels follow. And for specifics, we refer to Records of Medieval Sword, 1991, where Oakeshott introduced families to recognize trends in fashion throughout the sword development.

This type of observation is at the heart of this work and should be the first thing to focus on when using this typology.

Oakeshott conceptualized all the components of sword families – which we’ll shortly have a look into – and thereafter named them from A to M.

These families act as a compass when identifying a region or date as it can be hard, and sometimes impossible, to only use the single components to date or find the place of origin of a sword.

The examination of the blade, pommel, cross-guard and grip allows a sword to be categorised into four frames of reference for description and comparison. This allows the grouping of these swords into families of similar styles.

Oakeshott never considered his typology system to be complete or absolute- the typology was only meant to be a reference point to show common or average sword types. With this in mind, you’ll sometimes find some extant examples that don’t fit into a type.

Oakeshott created his institute so that the Oakeshott system could develop. And by harnessing that legacy, researchers like Marko Aleksić, Peter Johnsson, James Elmslie and, to some extent, we at Malleus Martialis expanded the classification.

The parameters that define the blade itself are blade length, fuller length, tang length and cross-section.

There was a wide variety of pommels in use during the Middle Ages, which is why Oakeshott created a separate typology for them. He grouped them into 25 basic types: letters A-Z excluding the letter Y for reasons unknown. Some of the letters have a numbered subtype: 1-5. Pommel classification poses the same problem as the blades insofar as there are so many variations that they sometimes don’t fit into a category.

The cross or cross guard separates the grip from the blade and is grouped into 12 basic styles (Style 1-12), with sub-categories appearing in letter form. Again, there are so many variations and decorations that these are just starting points and there are no absolutes.

It may seem as though there are many ambiguities, but that in itself shows you how complex the parameters around certain typologies are and how much more research and discussion is yet to come.

Another helpful parameter that can be used to aid the identification of medieval swords is their grip construction. Often these parts don’t survive the passage of time, due to the fact that they are mostly made of organic materials.

When they do survive, though, the construction and form can be important indicators in a sword’s identification, such as its place of origin and date.

Oakeshott did not describe grips in detail, so there is no lettered or numbered typology, but wrote about them in The Sword in the Age of Chivalry.

The Sandwich Method – two halves carved to fit the tang.

The Bored-through Method – the grip is shaped and then is bored straight through. The tang is then heated and the grip is forced down onto it. By burning through the wood, a perfect fit is achieved.

Here at Malleus Martialis, we like to add the Scales Method – two scales that are riveted on the tang. 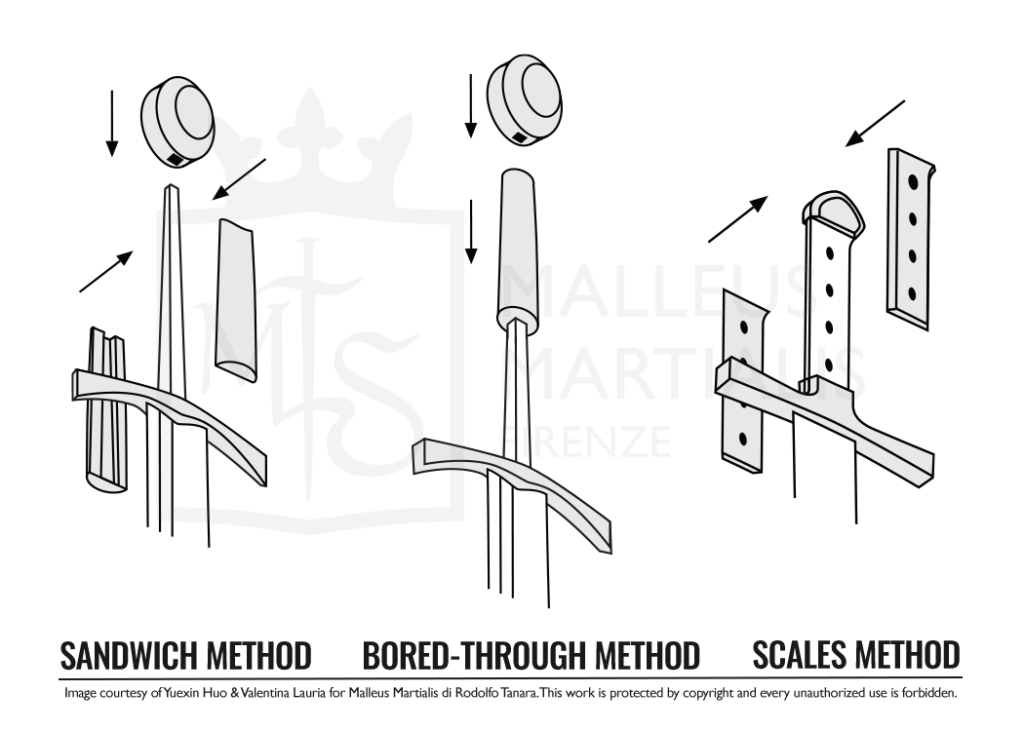 It is inevitable that in formulating a typology it will be found that there are objects which cannot be put into a specific group or category. This is particularly true in the case of swords.

Oakeshott didn’t classify everything. He understood it would be naïve to think that classification could be set in stone. And predicted that new information would come along which might throw new light on a sword’s type. He knew a cross, a blade or a pommel could have a strange shape. And that variants of swords, especially from the end of the 15th century, were likely.

When the limits of classification and if a sword type proved ambiguous he, like us, consider them as unclassified. In this case, we could use adjectives to define a variation or search elsewhere to find different typologies.

To show you what we mean take the example illustrated below. We’ve classified this as “curved style 8” to define the cross because even if it’s curved like a style 7, its combined components match more precisely with style 8.

We know you’ll be buzzing with the new information you’ve learned about the Oakeshott system. So share this post with other sword enthusiasts and let them know about sword classifications too!

Next time, we’ll take a closer look at the different types of the Oakeshott classification system. We’ll help you develop your Oakeshott obsession even further.

See you next time!