Home » The Duel of Isabella and Diambra | Ladyfencers series 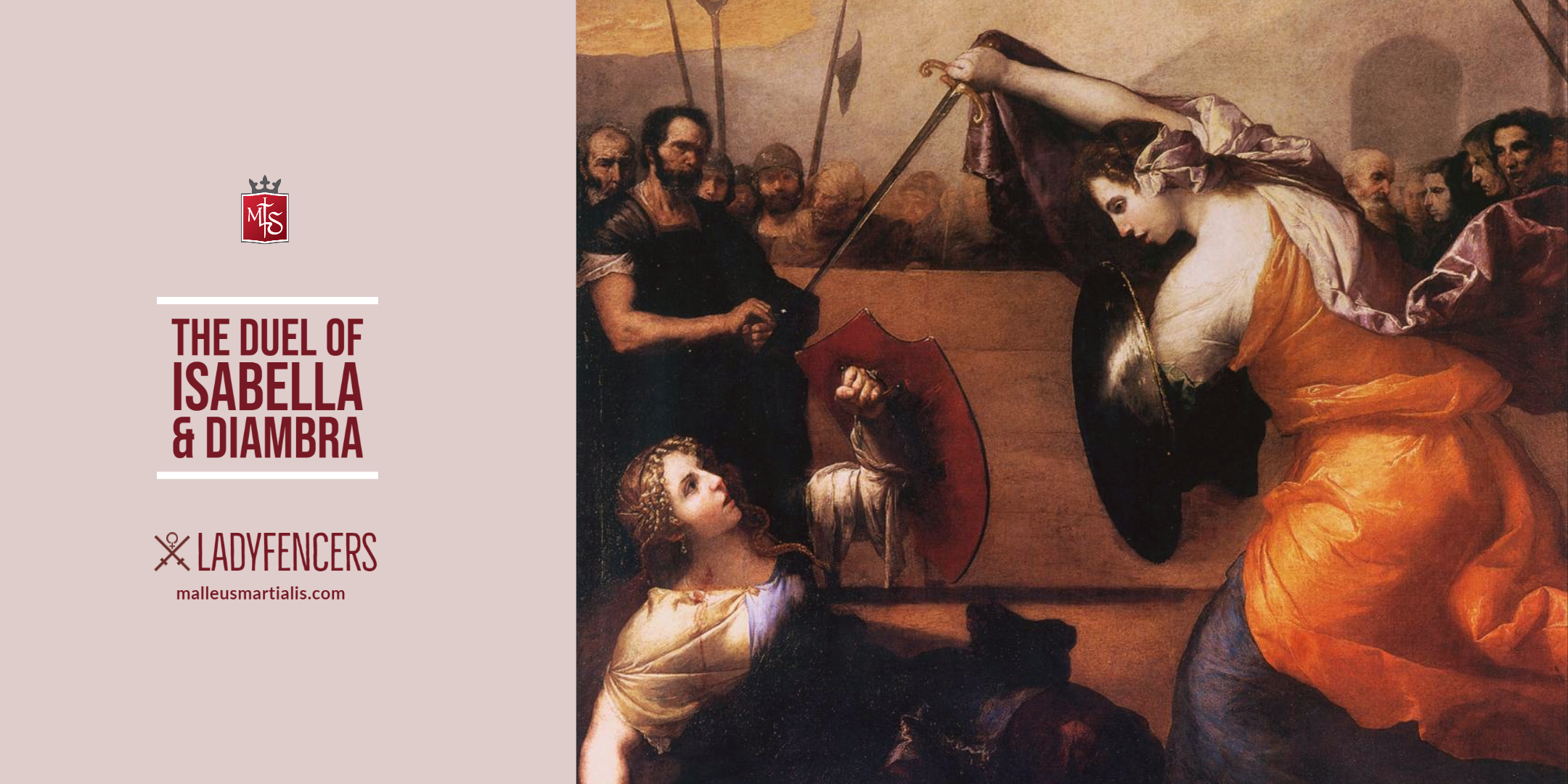 The reasons why women accepted to duel in the past were not that different from the ones that move men. Even if it sounds rare and weird, fierce women fought for their honour. There are peculiar yet fascinating episodes, like the Duel of Isabella and Diambra.

Today we’ll tell you the story of a duel for love, pride and honour.
This is the story of the duel of Isabella dè Carazzi and Diambra dè Pottinella, Neapolitan gentleladies.

There they stand, their horses snorting in the misty dust of the square, the sun glistening on their helmets. One adorned with diamonds, and the other with a golden snake.

This is 1552, a fine day of May like any other in Naples, but one that will long be remembered. This is the day the two noblewomen went head to head in full war gear for the shared love of Fabio de Zeresola, a man dangerously popular with the ladies.

Isabella Dè Carazzi and Diambra Dè Pottinella were friends, until the day a social gathering put the three of them around the same table. When Isabella saw the glance Fabio cast Diambra, she knew. Without hesitation she challenged her former friend and the altercation escalated pretty quickly.

“Fabio is mine!” she yelled
“Liar.” she growled

Fast-forward six days, to the duel that became the social event of the year. The whole court of Naples was there, including the Marquis of Pescara and future Governor of Milan, Francesco Ferdinando d’Ávalos d’Aquino d’Aragona, mingling with common people who put their daily chores on hold for the occasion. Duels weren’t a daily occurrence, but the two women fighting for a man was something unheard of.

They mounted their horses and ferociously charged with lances, ready to knock the opponent off the horse.

After the initial clash, Isabella and Diambra switched to maces to determine the victor of the fight, panting, gasping for some more air before launching another attack.
In that very moment the silence drops amongst the vast crowd witnessing the duel, the only noise is the flapping of matching velvet robes and thundering hooves. Diambra smashed Isabella’s shield in half and knocked her off the horse demanding that she admits that Fabio belongs to her.

Diambra looked down at her foe hitting the floor in a tangle of fabric and metal, savouring the victory. But the taste quickly turned sour as she saw Isabella standing up, charging her with a sword and pinning her to the ground. But she didn’t however go further: she adjusted her cloak and sheathed the sword.

‘I am better than that. Who is this man, after all?’ Isabella must have wondered.

‘We are of noble heritage, sophisticated members of the Neapolitan èlite. He… he is just a charmer.’
The love of such a man wouldn’t be enough to justify such violence. This was a matter of honour, pride and chivalry.

Pride, Honour, Chivarly: words of immense power, yet dark plagues affecting the human soul through the centuries.
This is the story that has been handed down and reached me, a hundred years later.

The intensity of the fight and the chivalrous attitude of those two extraordinary ladies inspired me to paint the Women Gladiators, a large allegory of vice and virtue. Because those fights are destined to be immortal, as a beautifully cruel reminder of the true nature of a duel of honour.  You might have guessed by now that my name is Jusepe de Ribera but you can call me Lo Spagnoletto.

If you enjoyed the story about this Duel of Isabella and Diambra, you might want to check out our LadyFencers series, where we handpick the most incredible women in history – from noble-hearted ladies to downright nutjobs – who left funny or epic stories behind, for better or worse!
Follow us! → Instagram | Facebook