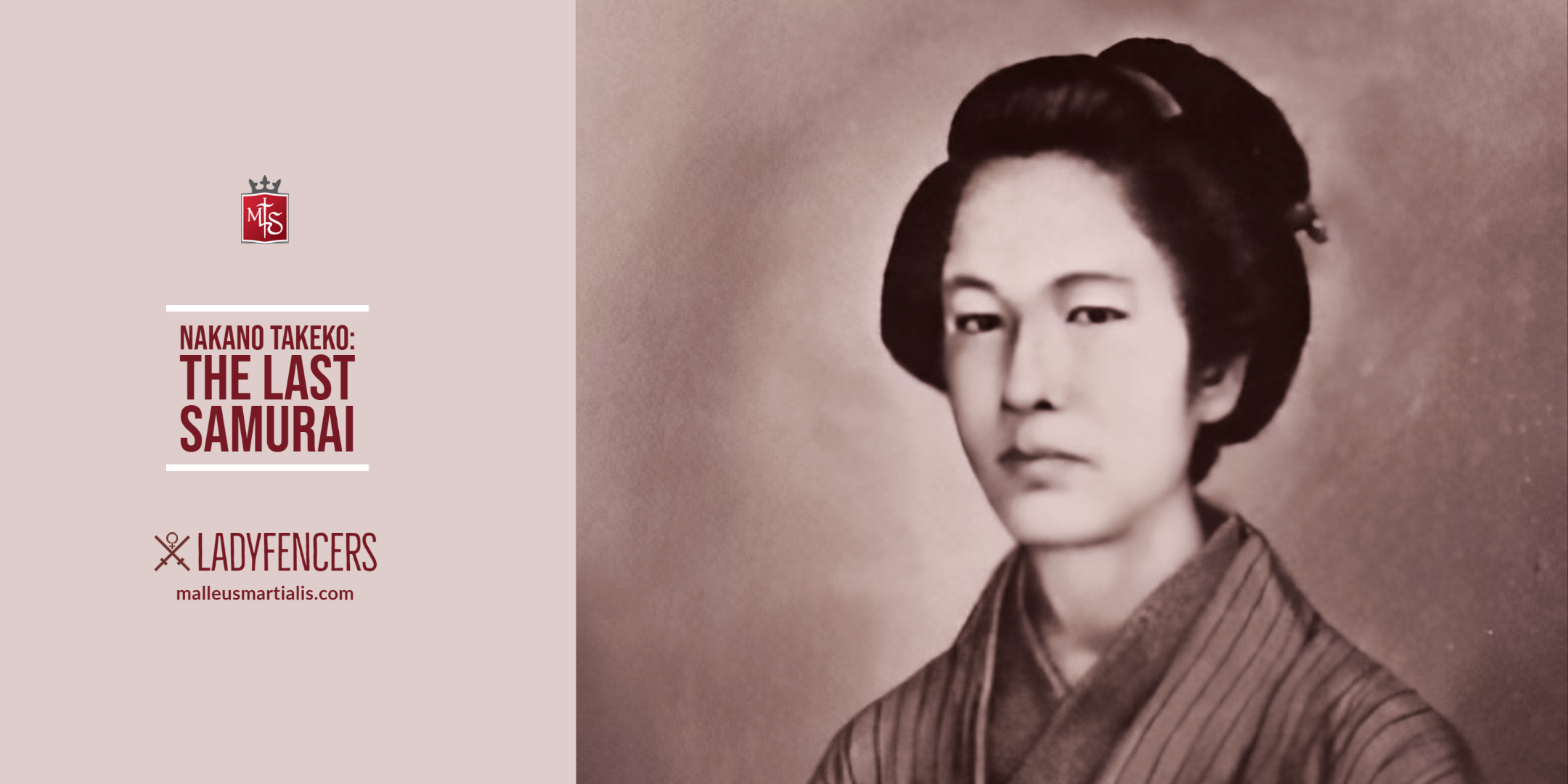 This time we are leaving Europe to meet a woman who gained her place in the Japanese history at the time of the Boshin War, the civil Japanese war fought between 1868 and 1869 for the restoration of the Imperial authority against the Tokugawa shogunate.

Today we’ll tell you about the Last Samurai, Nakano Takeko, who fought following the way of Bushido.

In a dignified silence Yuko Nakano drops to her knees, next to the lying body of her sister Takeko. The sound of the battle around them fades – the metal clanging, the shrieks of horror and pain, the crackling of gunpowder – muffled by the blood furiously pumping in their ears.

They have a window of opportunity, now that their opponent is retreating and regrouping.
To get to the walls before the soldiers reach firing range and reload.
They barely have time to make it, let alone drag a body with them across the soggy, heavy battlefield.

Takeko Nakano is dying, exactly as she expected, and it’s time to execute her dying wish. She stares at her sister, who’s holding her head tight, with her piercing steely eyes, and points at the walled town. At the temple behind those walls. A tear runs across Yuko’s cheek, drawing a clear line on dirt and blood. She nods. She knows.

The temple has been a favourite place of Takeko’s since her recent return to her native Aizu. She spent most of her life in Edo – which now goes with the name of Tokyo – where she trained with Master Akaoka Daisuke in sword, spear and hand-to-hand combat.

And when we say “training” we mean all day, every day, for about ten years straight. This, combined with an uncanny discipline and an innate talent forged one of the most famous female warriors in Japanese history. She excelled in the use of naginata, a weapon that can be described as a wakizashi blade stuck on top of a giant pole.

Onna-musha, combatant women, weren’t at all uncommon but during the late Edo period, peace brought some undesired social effect. As samurais handled pens more often than swords, the absence of wars turned them into bureaucrats, and their female counterparts were gradually submitted into serving their men’s ambitions.

But not all of them liked this. Our heroine Takeko was obviously one of them. At the first sign of threat to her liberties she upped and left Edo, moving back to Aizu. At that point she was a certified master and started teaching the art of naginata to the women and kids at the Aizuwakamatsu castle. She even dedicated herself to hunting and prosecuting peeping toms loitering near the women’s bath houses.

It was a momentous time for Japan, 1868 was the start of the Boshin war, a brief civil conflict that defined Japan as we know it. As expected, when Takeko was finding her place in the world, with her privileged status at a noble castle, this is exactly when things go awry.

To make it short: on one corner the Tokugawa shogunate for a traditional old-school samurai country, on the opposite corner the Meiji Emperor team for a modern, open country.
Takeko and her hometown sided for Tokugawa, for the old ways that reflected her way of life and the choices that would consistently accompany her very end.
When the Meiji forces overthrew the Shogun, 30.000 imperial soldiers brought the last sparks of war to Aizu.
Surrendering isn’t an option. Takeko Nakano gathers a Joshitai, a small troop of well trained women, armed with the deadly naginatas. Her mother Kouko and sister Yuko, along with another famous warrior, Yaeko Yamamoto, join her.

The Way of Bushido

It is a hopeless fight: outnumbered five-to-one, and outgunned by professional soldiers with modern rifles, Takeko launches the attack. Because this is the way of bushido.

The soldiers stop shooting, being confused by what exactly is going on. The Joshitai women had styled themselves, hair and clothes, in a suitable battle fashion, and the soldier hesitate, thinking it is probably a motley gang of desperate teenage boys.

Only it isn’t a bunch of teenagers. And the soldiers realise that too late. Before they know the Joshitai rain on them a furious whirlwind of poles and blades.
Takeko takes seven of them out before one of the soldiers can get his wits together just enough to load his rifle and shoot her. Point blank right in the chest.

Now Yuko, and some of the surviving Joshitai, have a very narrow window to grant their leader’s wish. Her hands tremble as she lowers the blade to Takeko’s neck. One blow, two blows. Finally she manages to hack her sister’s head off, saving it from becoming a trophy and taking it to the temple for a hasty, but sacred burial.

Shortly after the battle the Meiji era began, heralding the new modern Japan with various reforms like the abolishment of the samurai class. This makes Takeko Nakano one of the Last Samurai.